A Word about Nuns

In the past few weeks I have read two books about nuns.  No, I did not go looking for books about nuns, I am reading everything by author Ron Hansen, hoping his expertise in historical fiction will rub off, and two of his books just happened to be about nuns.
My experience with nuns has been limited.  Of course, there was Sally Field flying around the convent and Whoopi Goldberg hiding from the bad guys that almost made Nun-dom look like fun.  But, I’ve had such little contact with “real” nuns that I’ve always considered them mysterious, even mystical women.
So now I’ve read two books, works of fiction, mostly, but fiction so well written that the nuns came to life on the pages.  And although the stories were both very powerful, the education I received in Nun-hood was priceless.
Exiles by Ron Hansen is the story of five German nuns, destined for , who die on the steamship Deutschland.  The story is told alongside a second narrative, that of Gerard Manley Hopkins, a priest and poet who was so taken with the story of the nuns that he wrote a very detailed poem about their experience called “The Wreck of the Deutschland.”    Hopkins and the nuns are real people, their stories fictionalized.  Although the ending of the story, the death of the nuns, is already known, it is the telling of their story that is exceptional.
Mariette in Ecstasy, also by Ron Hansen, is a fictional account of a young postulate in 1906 who develops the five holy wounds of Christ, stigmata.  Half of the other nuns in the convent think she is a saint.  The others think she has wounded herself for attention.  It is a beautiful story, one that definitely makes you think and (one of my favorite things),  has a surprise ending.
I’m not a big follower of “nun literature”, nor do I seek out these types of books in general.  However, I do feel like I now know a little bit more about those amazing, mysterious, mystical women and recommend both of these books to my reader friends.
Posted by Kelly Stone Gamble at 5:05 AM 1 comments

I have a picture that was taken when I was six years old.  I remember the day, at least in the way anyone can remember forty years past.  My dad had just taught me my very first song, ‘Lovesick Blues’ by Hank Williams, and told me if I kept practicing, I could be a professional yodeler someday.  In the picture, he is sitting in a chair and I have my arms around his neck.  He always had a way of making me feel special. 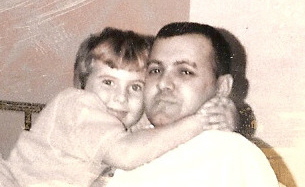 I have another, taken when I was twenty.  There was a party going on, I don’t remember the occasion, but he and I had ended up in the kitchen, away from the crowd, having a drink and telling each other jokes.  He made fun of my boyish haircut.  I called him Sonny Bono.  He’s sitting in a chair and I have my arms around his neck.  He always had a way of letting me know that he loved me. 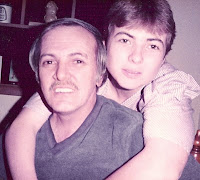 ﻿
The night before he died, he told me how proud he was that I had grown into a good mother: a good woman.  I put my arms around his neck.  I remember it well.  I don’t need a picture.
It has been eleven years and Valentine’s Day has never been the same.  It was his birthday and this year would have been his seventy-third.  If he were here, he would make me yodel for him and I would make fun of him for being so old.  Then I would walk up behind him and wrap my arms around his neck.
I still think of him every single day.  My father, my daddy, my friend, my first valentine.
Posted by Kelly Stone Gamble at 5:58 PM 2 comments

I am a student in the Southern New Hampshire University low residency MFA program and I just completed another winter residency with forty of my closest friends.
It is hard to describe a residency experience, but there is something magical about being surrounded by talented, inspirational people that seem as excited about your writing as you are.  We learn a lot in our workshops and of course we have fun, but it is the community experience that cannot be described.  People sitting with notebooks, tapping on laptops, writing on their hands.  scenes informally in a corner for feedback, making lists of “flaws” that could be attached to characters.  Crying about powerful scenes, laughing about everything else.
Now I am home and now it begins.  That period of being back in the real world, where working the day job comes first, writing second.  Where my husband, although always supportive, doesn’t understand why I fret over a paragraph, a sentence or a word.  Where a phrase like “Bro-s before Prose” doesn’t bring a smile and a bottle of fairy dust is nothing but a child’s toy.  The real world.
Post residency depression.
It usually lasts about a week.  I will feel sorry for myself, look at my pictures and try to keep those memories fresh for just a little longer.  I will eat junk food, smoke too much and try not to roll my eyes when my husband says, “It’s just one sentence, who will notice?”  I will procrastinate in my reading and in my writing, throw a few inappropriate fits and argue with a convenience store clerk or two for no apparent reason.  I will stay in bed as long as possible, take several hot baths and try everything I can to get out of cooking dinner.
Then I will sit at my keyboard and begin again.  Write, read, edit, delete, revise, repeat.
Posted by Kelly Stone Gamble at 11:01 AM 0 comments