Excerpt from The Trees Beneath Us by Darren R. Leo #CallMeDaddy


I asked for stories about family: the fun, the inspirational, the heartwarming moments that make us part of a family. Author Darren Leo shares an excerpt from his novel, The Trees Beneath Us, which is the story of a father that is trying to cope with the loss of a son. 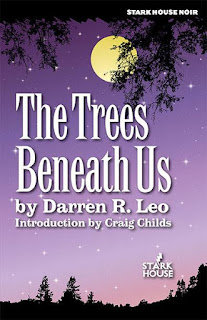 I remembered him carving graceful and effortless turns through fresh powder at Alta and showing me how to tie a double fisherman’s knot.  We never climbed together.  He was already beyond his climbing days when I took it up.  I would have liked that.  He would have bitched about bolts being a cheating shortcut for driving pitons, but he was grudgingly pleased when I led an unbolted 5.12.  He still said the equipment was so good now that anyone could do it.  And I went out looking for other achievements that might impress him.
I took a long drink from the bottle.  The darkness pressed in around the firelight like a warm sleeping bag.    I thought of other happy memories of my dad.  There were plenty of unpleasant ones, but it would do no good to dig those up.  Given the circumstances of our relationship and my life, a good meal and thinking of him by a fire in the wilderness were the most honor I could offer him.  I looked up at the reaching limbs of the fir tree.  Bad news does not travel through trees.  The boulder loomed solidly behind me, and the reflected fire danced on its face.

Posted by Kelly Stone Gamble at 4:09 AM 0 comments


In anticipation of the release of Call Me Daddy, I asked for memories about family, the good, the bad, the funny. Author Kelley Kay decided to get "Sticky":

I feel like a horrible mother about five times a day. My voice gets screechy or I snap at one of my two little boys right after I’ve SWORN in my head, not two minutes earlier, to keep a calm tone in all my interactions.
Ha.
I will say, though, that at least I’m thinking about it. My job as a high school teacher and now as a writer give me the advantage of a certain consciousness and reflection on my behavior, and I’m trying, every minute, to do it better. One of the ways I’m trying to do that is by being more aware of my boys just in terms of inhaling their funny and fabulous behavior and interactions: with me or anyone around them. I’m working on appreciation and gratitude, and this blog comes from one of the situations I ‘imbibed’ early after this resolution.
A five or seven year old boy is not incapable of intelligent conversation, really he’s not. It’s just that there is something inherent in his nature that guarantees, especially if he’s talking to another little boy, that after two or three minutes the conversation will devolve into something related to poop. Fletcher (my youngest son) has a close friend named Stone. For their transitional kindergarten year (he was 5) they got shipped across the way to another school, so a couple of times a week I picked Fletcher and Stone up after their half-day school day.
During these days I would turn the radio up a bit and tune out their chatter. I listened a little, but absentmindedly, reminding them when they start talking about killing people that we don’t do that, and to stop talking about poop. Sometime in January I figured out this was another example of me not getting the most out of their childhood. I didn’t start conversations with them, oh no! Instead I just listened. These two five year olds were masters of nonsensical conversations, and from that point on I just inhaled their jibberjabber. I relished every moment of the drive home for the rest of the year, and while reproducing all of their conversations would not be something for you as the reader to relish (plus I didn’t write everything they said down—we  never would’ve made it  home), I hope this personal favorite will make you smile if not giggle out loud. Here goes.
Stone: San Frisco we go to San Frisco and my mommy goes, but I had a dream that dinosaurs came there.
Fletcher: Did the dinosaurs eat your mommy?
Stone: Don’t be ridickoolus, the dinosaurs ate San Frisco! I ate San Frisco I ate his FACE!
Fletcher: I think we should do a zipline don’t you want to do a zipline? My fingers are sticky. (He looks at his fingers.) Hey I like that word: sticky sticky
Stone: Don’t be ridickoolus, sticky sticky sticky
Fletcher: Hey don’t interrupt sticky sticky sticky
Stone: Don’t YOU interrupt!
Fletcher: Don’t YOU interrupt!
Stone: No you! Don’t YOU interrupt!
Fletcher: (giggling) Don’t YOU interrupt!  Interrupt interrupt interrupt (and they go back and forth, loving the word interrupt and getting louder and louder until I have to calm them down.)
Stone: Ridickoolus. Let’s do a zipline in San Frisco. (He giggles fiendishly here) Hey we can’t the dinosaur ATE it remember!
Fletcher: The dinosaurs ate your FACE! Hey, mommy!
Me: Yes?
Fletcher: Me and Stone ate…
Me: Stone and I (Yes, I do this. Ad nauseam.)
Fletcher: Stone and I ate a whole swimming pool, did you know that?
Stone: (Chortling) and a car! Didja know we ate a whole car? Vroom, vroom, yum, yum.
Me: Hmmm, and how did this car taste?
Fletcher: Sticky!
Stone: Sticky like chocolate and red vines
Fletcher: And cupcakes and salt water and Willy Wonka Nerds. Hey my favorite is the green what’s your favorite?
Stone: Nerds nerds nerds! Hey didja know I ate a fire engine? A fire engine in San Frisco.
Fletcher: Ha ha ha! And I bet it was so sticky!
We always arrived to find Stone’s nanny and his little brother Maxwell sitting on the driveway. Fletcher would roll his window down and yell “Bye Stone!” starting from the second we drove up to the time the nanny closed the garage door.
Stone and Fletch are both back to the school we’re supposed to be in, and while I think they still play at recess once in a while, I miss the afternoons when they both explained their voracious appetites for inanimate objects. And ridickoolus ziplines in San Frisco. Sticky, sticky.

Kelley Kay is the author of Death by Diploma, an excellent cozy mystery that you all should check out! In fact, it is on sale this week for only 99 cents, so Feed Your Kindle! 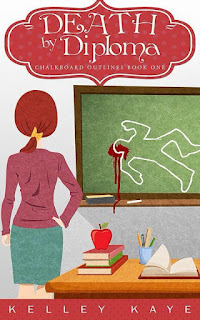 You can find Kelley here:
Kelley Kaye on Facebook

Posted by Kelly Stone Gamble at 3:53 AM 0 comments