In Defense of Rattlesnakes…Or Not

When I first moved to , I wanted to explore the desert.  One evening, as the sun was going down, I took my two small sons into an open area to look for jackrabbits.  Talking all the time, pointing out all the wonders of the desert to them, I lost track of one very important aspect of desert exploration: personal safety.  My oldest son finally asked, “Mom, what is that sound?” I stopped and listened.  A thousand maracas, in every direction.  We were surrounded.
Luckily, we made it out without incident, and I immediately went home and started researching rattlesnakes. Just the word ‘rattlesnake’ made me cringe, and I needed to know if they were really as bad as all that.  I discovered, well, yes and no.
Of the thirty two different kinds of rattlesnakes that exist, of course, one of the most dangerous lives in my area: the Mojave rattlesnake.  They don’t lay eggs like most snakes, they have live births.  The babies are born with fully functioning fangs and venom and are capable of killing at birth. Older, bigger snakes have more potent venom and a larger storage capacity, but they do have a little self control. The young ones know no better than to bite and release their entire load.  In other words, even the newborns are very dangerous.
The venom rattlesnakes release destroys tissue, causes internal bleeding and intense pain.  The Mojave venom, additionally, can cause severe paralysis, which comes in handy when it’s time for them to eat.  They bite, the prey is paralyzed and they ingest their food head first, flesh and bone. 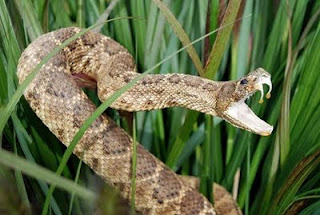 Rattlesnakes have “heat vision” and basically can sense heat signatures from great distances.  In fact, they can detect the heat of a candle from thirty feet away. So, yes, they know where you are, even if you don’t know where they are.
If you happen to be a small animal, your chances of surviving a rattlesnake attack are pretty slim.  But what about humans?  Few die, only because most are smart enough to immediately get to a hospital for anti-venom, but there are always those who think they are such badasses that they can tough it out, suck it out (wrong) or just let the venom pass. RIP suckers.  But even though survival rates are high, it does hurt like hell.
But here is my defense of the rattlesnake.  I’ve now lived here for sixteen years and have yet to see a live one, although I’ve heard them many times.  They aren’t that interested in humans, because they can’t eat them, and basically just want you to get out of their way.  Nice little creatures that they are, they warn you that they are around by shaking their rattled tail up to sixty times per second (!).  So if you are smarter than a rock, you can turn and walk, or run, the other way.  And you should take that warning.
In my upcoming novel, Ragtown, the Mojave Rattlesnake has a distinct presence.  Most of my characters are smarter than rocks; but there are a few who think they are badasses...
Posted by Kelly Stone Gamble at 2:42 AM 3 comments

It was the 1930’s and racism was widespread.  The worksite of the Hoover Dam was no exception. The government's contract with Six Companies stipulated that only American citizens be hired for the job. The term American citizen, however, came to be defined as white American citizen.
For Native Americans, jobs were rare.  Of the few that were hired, most were employed as high scalers, due to the stereotypical belief that they were used to high places and dangling hundreds of feet from the steep canyon walls would be a non-issue for them.  Sitting on a small board strung with hemp rope, they would pack dynamite into the walls and swing out of the way before the rock exploded.  It was the most dangerous job at the worksite. 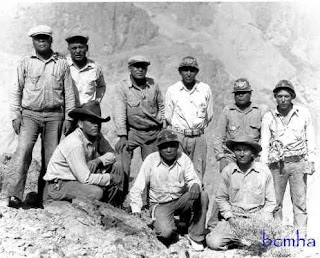 Like most writers, I have a list of authors and books that I find inspirational.  My favorite author is Marguerite Duras, and my favorite book is The Lover, and if you are not familiar with it, you should be.  It is a beautiful story and an excellent example of the craft of writing.

As a teenager, Marguerite Duras lived with her mother and two siblings in French Indochina.  It was the 1930’s and young Marguerite was trying to identify with the world around her.  Her family was poor, and although political and racial tensions existed on extreme levels, she had an affair with a wealthy Chinese man.  This affair was later written about several times during her life.

And I like that.  To know that someone as accomplished as Marguerite Duras continued to perfect her craft, her story, throughout her life is inspirational to me as a writer.

So why Crazy Mother?  Marguerite Duras had a tense relationship with her mother, as I had with my own.  Although our mother-daughter relationships were quite different, I believe that for our own reasons, most of us can appreciate the range of emotions that are represented in the following quote:


I believe that always, or almost always, in all childhoods and in all the lives that follow them, the mother represents madness. Our mothers always remain the strangest, craziest people we've ever met. –Marguerite Duras
I am a mother.  Do my children feel the same way about me?  I read this to my oldest son, who laughed and said, “Yes, that sounds about right.”  I then read it to my youngest who said, “Of course we think you’re crazy, but we love you just the way you are.”  That was all I needed to hear.
Throughout our lives we are assigned many titles: Mother, Daughter, Student, Professor, Author.  However, we don’t always choose to own or perfect each title, often, we only choose to identify ourselves with the ones that we consider positive attributes.  I’m not sure I agree with that.  I am much more than just the good, the accomplished, the positive.  I hope when I am seventy years old, I have the courage to look back and redefine, redescribe, rewrite the stories of my life that have been most influential, whether they be good, bad or ugly.  Because yes, I am a little crazy, and I’m okay with that.

Posted by Kelly Stone Gamble at 1:13 AM 1 comments

Stories from the Hoover Dam: Johnny-behind-the-Rock

In 1931, with the country in the midst of an unprecedented economic disaster, thousands of Americans made their way to the desert to seek employment on what would become the Hoover Dam.  While most made their homes along the highway between the jobsite and the small railroad community of , forty miles away, the most desperate never made it beyond on the banks of the .  This area was officially known as Williamsville, named for the U.S. Marshall who became the overseer of the tent community.  To the residents, it was known as Ragtown.

It is hard to imagine how hard life was for the residents.  The Dam project hired approximately five hundred men initially from the thousands that had descended on the area, leaving the majority to starve in the desert.  Starve, that is, if they survived the Black Widows and rattlesnakes, scorpions and centipedes, not to mention the bouts of dysentery experienced from lack of drinking water and, of course, the heat related illnesses and deaths.

The lucky ones had tents, but many lived under whatever form of shelter they could find: cardboard boxes, sheets strung between trees, a ply board lean-to, or just openly in the desert.

According to past residents of Ragtown, there was a man named Johnny who lived behind a large boulder.  He was too old, they say, to be employed at the Dam and he was apparently alone in the desert.  He had nothing more than the clothes he wore and he rarely spoke to anyone.  He survived on the generosity of others.  His back story is a mystery.

During the day, as the sun moved across the sky, Johnny moved behind his boulder, finding the shady spot to sit in.  And that became his life.  Sleeping behind a boulder, no chance of getting work, living in the desert, no family—nothing.  The residents simply called him Johnny-behind-the-Rock.  There is no official record of the man, and there is no account of what happened to him when Ragtown was cleared out by the government.

I’m not sure that many of us today can even imagine that kind of life.  We think the world is against us if our cell phones don’t work, or if the electric bill is too high.  But having no family, no friends, one pair of clothes and a big rock to call your home?  And sadly, Johnny was one of thousands.

When I began writing my historical fiction novel, Ragtown, I felt it important to breathe life into some of the minor characters that inhabited the area.  I wanted readers to see the individual struggles, the desperation and the horror of just living that many of these people experienced.  Although I couldn’t possibly include all of the stories that came out of Ragtown, I am happy to say that Johnny-behind-the-Rock’s did make the cut.
Posted by Kelly Stone Gamble at 5:59 AM 1 comments

Adams and Jefferson: And the Winner Is....

Thomas Jefferson and John Adams just didn’t like each other.  They had political difference; was a Federalist and was a Democratic-Republican.  They locked horns on more than one occasion during the first and second administration while served as Vice President and served as Secretary of State.  Clashes between the two were widely known, and then, of course, beat the incumbent President Adams in a heated election, thereby increasing the friction.
In later years, there may have developed a grudging admiration for each other.  However, was known to have said on many occasions “I will outlive .”  I guess, in his way, felt that outliving him was the best way to beat him.  Beat him at what, I’m not sure.
John Adams died on .  His last words?
“Thomas Jefferson survives.”
Not “Abigail, I’m coming,” or “Make me proud, J.Q.,” or even “It was a good life.”  No, his last thought was about Thomas Jefferson and the fact that he would be outlived by his long time rival.
What John Adams didn’t know as he took that last breath was that Thomas Jefferson was at his home on that very day doing exactly the same thing that was doing: dying.
Thomas Jefferson died on as well.  He died a few hours before . was unaware of this, and went to meet his maker assuming that he had failed to live up to his proclamation that he would “outlive ,” when in fact, he had.
I imagine John Adams, standing in line at the Pearly Gates, his head held low, feeling as if he had failed at the one thing he felt important in later life: outliving .  Then, he hears a familiar voice ahead as Saint Peter says “state your name” and checks his book.  peers around those in front of him, and smiles.
Then I imagine Thomas Jefferson, hearing laughter, turning and smiling back, taking only a moment from Gate check-in to yell to his old friend:
“I got here first!”
Posted by Kelly Stone Gamble at 1:37 AM 1 comments