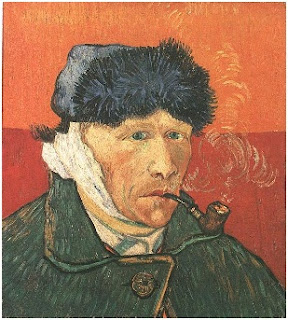 Almost four novels written. The first one I don't usually count, because even divine intervention  couldn't fix that, but novels two and three are pretty good (if I do say so myself, which, I just did). The problem is, I haven't been able to get an agent who likes them enough to sell them. Notice I say 'likes them enough', it's not that those that have read them haven't liked them, just not enough to jump on the Kelly train.

A  few weeks ago, I started thinking of what to do when this fourth novel is complete. Do I start on another? Send out a hundred more queries? Or just stack it on top of the others? Personally, I think four unpublished is enough. I need a hobby that doesn't revolve around rejection. Maybe I'll sit on the porch and count the cars that go by instead. Yes, I'll stack this one on top of the others and shove it in a box.

We all have our own monsters; mine are typed in 12 point font.

Maybe, I thought, I am the Van Gogh of writing. Maybe, after I die, my kids will find a stack of manuscripts, read a few and decide, 'these aren't so bad'. Maybe they will find someone to take them on, and I'll be posthumously famous, my kids earning royalties for the rest of their lives. Vincent, like me, was agentless. He peddled his wares on a street corner and perfected his craft in a mental institution. Not exactly what I had in mind, but after reading thirty-plus versions of "I love the story but..." I decided it was time to embrace my inner Van Gogh.

Last week, while I was hacking off my ear, I heard the notification 'ding'-- Another email from an agent. I didn't want to look, but thought, what the hell. I put down the straight razor and read a familiar first line..."I love the writing, but..." As I continued to read, though, it didn't actually seem like a rejection. Instead, it was a suggestion for a tweak to the manuscript and ended with:

"What do you think?"

"I think I should find an old newspaper to wrap this ear in," was my first thought, but I didn't know if this particular agent would appreciate my dark humor. Oh, hell, of course she would. She just read THEY CALL ME CRAZY. "And she liked it, but...."

So I responded (I left out the ear part), and attached a chapter revision that addressed her 'but'.

And today, I sewed my ear back on.

THEY CALL ME CRAZY
Represented by Svetlana Pironko
Author Rights Agency
Posted by Kelly Stone Gamble at 4:27 AM 23 comments