My friend Jen Boissonneault wrote a blog post about dreams, which in turn inspired another friend, Natalie Kenney, to blog about dreams, and I thought this would be a good time to jump on the dreamwagon. My dreaming is a little different than most because I have Narcolepsy.

Not the "I'm-just-tired-all-the-time-so-I'll-claim-an-illness" kind, but the real thing. Although I'm sure I've had it for decades, I was officially diagnosed about ten years ago, and my life definitely changed.  I've tried all of the medicine on the market, but found the side effects were more than I could handle, so I adjusted my lifestyle. I sleep four times a day, for a few hours at a time. It's currently 3am, and yes, I am writing this post. I now schedule every part of my day and if my schedule is interrupted, it can be very distressing.

I experience cataplexy almost daily, so I have learned to control my emotions. I love to laugh, but I make sure when I do, I am sitting down, or at least holding on to something. Otherwise, I may fall down. Sleep paralysis I experience quite frequently, and although I should be use to it, it is still frightening every time.

So what does all of that have to do with writing and dreams? I'm getting there. First a nap...

While many people have difficulty falling asleep and then typically take an hour or more to reach the first phase of REM sleep, I don't. My non-REM periods, the 'brain resting phase' of sleep,  are very brief. Typically, I'm asleep in less than five minutes of my head hitting the pillow; my husband claims it's more like less than a minute. But although it may appear that I'm sleeping at first, I'm really not. I go through periods of hypnagogic hallucinations, which many artists, like Beethoven and Salvador Dali, said aided their creativity. Some, maybe, but most are frightening. They seem more real than reality, if you can imagine something like that. And it is the one time during my sleep period that I don't realize I am actually asleep. I once called 911 during this period and told the operator there was someone in my house and my husband had been shot. I could smell the gunpowder. Yeah, explain that one to the cops at 2am.

Then, finally, I get to the good stuff. The REM sleep, the dream state. This is the best part, not only because I dream lucidly every time, but because I can control my actions in my dreams. There's a fancy medical term for that, too, but basically, if I'm having a nightmare, I just change it. I turn monsters in to puppies, or I fly away. I like to jump off buildings and mountains and then catch myself just before I hit ground. Call it my dream hobby. I guess this is my sleep reward for making it through the hallucinations without going crazy.

Then I wake up, almost directly from REM, and can go right back to whatever I was doing before my nap. And, yes, I do this at least four times a day.

So, of course I have the cataplexy to deal with, and my brain will eventually burn out from lack of rest, if I don't die of a heart attack during a horrifying hallucination first, but there are benefits,  as a writer.

My creativity meter is always on high. I've found myself 'creating' a scene in a dream, watching it, changing it, smelling it, feeling it, and then waking up to write it. The middle of the night is my most productive time, because the house is quiet, I've just had a two hour bout of inspiration, and can sit down and write non- stop for hours.

Then it starts all over again.

Please check out Jen Boissoneault's blog post about dreams facts and Natalie Kenney's blog post about her own dreams as inspiration for writing.Then feel free to jump on the dream wagon with us this week!
Posted by Kelly Stone Gamble at 4:09 AM 14 comments

Editing: Nothing to Cry About


If you are a writer involved in a group of like-minded crazies, I'm sure you've sent a message similar to the one I sent a few weeks ago to my inner circle:

I need a reader.

It was a simple request and was met with a response from my friend and author David Rawding:

Sure. Page for page?

And that's how it began. I sent him 30 pages, he sent me 30. Then it became an episode of Writers Gone Wild as we delved into a week of editing---marathon style. In a week, we both did a fairly in depth evaluation of each other's novel, forsaking sleep, food, showers and work. Not really, but it took all of our spare time. And it was well worth it.

David and I have very different writing styles and our strengths are in different areas. However, our editing style is very similar, and that is where the real fun came in to play. Neither of us are much for writing 'good job!' all over a page. We're both  thick skinned and prefer helpful comments to empty compliments. To- the-point, at times harsh and at other times, pure comedy.

His comments from one particular scene were brutal.  It didn't need to be there, and the actions of my protag made no sense. Yes, my friend made fun of me. Yes, I deserved it. Yes, I was able to laugh about it-- so hard that tears filled my eyes.

You see, I love the editing process. I want to know what works and what doesn't, what needs more description or less, and what is downright wrong about a scene. I take comments and suggestions very seriously and use them to make my work stronger. But it can be a tedious process devoid of humor, so it helps to have someone who can lighten things up a bit--Even if it's me they are making fun of.

Afterall, being able to laugh at yourself is a great trait to have. And hopefully, it will keep my readers from laughing at me later.

Check out David Rawding's website at www.davidrawding.com and read about his manuscript, Taking on Water.
Posted by Kelly Stone Gamble at 11:33 PM 7 comments

32 Years to Write a Novel


Recently, someone mentioned that they were thinking of writing a book and asked me how long it takes to write an entire novel. This person knows I love to write and that I work for hours each day at the craft, and I guess he assumed all writers are alike. It's like building a house, right? A professional contractor can construct an average house in 60 days, so surely there is a standard time frame on writing the average book.

My response: It takes 32 years to write a novel. 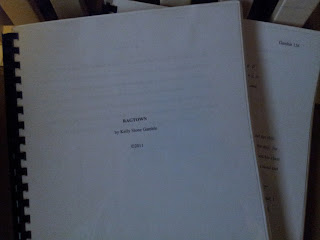 In January, 2009, I began writing what I call a 'big book', Ragtown, a historical novel set during the building of the Hoover Dam. I finished it in November, 2011 and in December of that year, started querying it.  The exciting thing about that time was the quick responses I had to look at pages, which only convinced me that yes, it was a 'big book'.  I started writing a second novel in January. Might as well have the next one ready, right?

What was not nearly as exciting about that time were the rejections.  The writing they loved, the story they loved, but 1.and 2.and 3.and... After several months of this, I had to face the fact that although I loved the story, all of the comments I had received were valid. And it was time to kill my darlings.

It's not that I have a problem revising, not at all. But no one could pinpoint exactly what it was that Ragtown needed or lacked.  I certainly couldn't, as I was too close to the manuscript, and I tweaked and cut and added and reworded and...until I felt brain fluid leaking out my nose.  The problem was definitely in the first 75 pages, but, what, exactly? Four well established professional authors, two editors, twelve critical readers and thirty rejections later, I still wasn't satisfied.

So I started with page 1. I know that sounds like the obvious place to start, but for a writer, it's 'easier' to just revise what you've written. However, I had a half completed manuscript stuck in a drawer that I just decided wasn't the book I wanted to write, so I knew it was the right way to go.  And I began:

Once Upon A Time, in a land where hand cramps and eye strain rule...

Today, 3 years and 1 month after I began this 'big book', I am satisfied--no, thrilled--with the first 28 pages.  28? What happened to 75? Well, after reading all of the comments from those above, I figured out the problem.  Going through the rest of the manuscript is proving to be--I don't want to use the word easy, because writing is not an easy game--but manageable. I know the problem. I know how to fix it, and I'm burning through pages now like a wildfire on crack.

Since I'm a tireless worker and don't seem to require much sleep, I should have it completed and ready to attack the query trail again in just a few months. I'm excited about it this time: for the right reasons.

3 years and 30 days to finally be satisfied with 28 pages. That is 32 years to write an entire novel.  Sound easy? Go for it.

Now querying THEY CALL ME CRAZY

Soon to rise from the depths of the Colorado River:  RAGTOWN (again)
Posted by Kelly Stone Gamble at 12:25 AM 10 comments